I’m someone who’s quite good at getting obsessed with things. The latest on that list (which has also included sous-vide cooking, skateboarding, and the use of parentheses within parentheses [with a focus on changing from rounded to square brackets {with occasional forays into curly braces}] with emphasis on ensuring that they are closed in the order that they were opened) is mobile blogging.

It all started way back in 2005, when I ‘liveblogged’ an attempt at visiting every tube station on the network in a day (first post in the series here). I blagged a bluetooth and mobile internet equipped Nokia phone from work, paired it with my trusty Palm device (maybe an m505 – I forget which one I was on back then), setup the email->blog post interface, and tapped out notes as we ran from train to train and station to station, pressing publish every time we hit the open air.

Things have moved on in the last 8 years and liveblogging is now a Thing. I first started properly thinking of it again when I visited Canada earlier this year for the Victoria Whisky Festival. I wanted to cover the event on my Booze Blog, but didn’t want to take a laptop with me, so used it as an excuse to grab an iPad mini – the device that I promised I would buy if Apple ever got round to releasing one.

While in Canada I had no trouble doing 90% of the tasks that I wanted to: I browsed the web, checked email, played with Twitter, edited photos shot on my SLR (thanks to an iPad/SD card adapter and Snapseed) and even managed to tap out a few thousand words into Evernote ready for later posting. However, typing was not fun and blogging while on location didn’t happen.

Further tinkering has occurred since the beginning of the year and I discovered that by happy accident not only does Apple’s bluetooth keyboard work with iPads, I also had a spare one sat on the side (thanks to a nice Apple employee just giving me a free wired keyboard when I asked if I could switch the wireless one that came with my iMac). This helped considerably, taking up minimal space and even allowing the typing of STUFF! while sat on the tiny tabled trains run by Chiltern Railways.

However, carrying my keyboard around wrapped up in a cloth bag for protection and relying on the increasingly weak magnets of my iPad smartcover to hold it in a sensible standing position has meant that I’ve not deployed my mobile solution very often. Not being able to stand the iPad up in a portrait position when typing longer pieces of text has also been something I’ve longed for. With the upcoming European Beer Blogger’s Conference on my todo list I’ve been looking for further refinement.

Ever since getting a copy of Games Workshop’s Chainsaw Warrior from him in a swap meet, I’ve been following Adam Tinworth on Twitter and reading his blog, as he’s progressed from being a salaried writer to a freelancer known for being mobile when needed. On his blog last week he mentioned that he’d been refining his liveblogging gear and one piece of kit stood out – the final piece of my jigsaw puzzle, the Incase Origami Workstation. 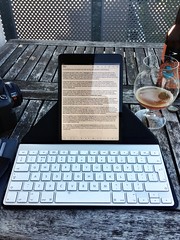 It’s a simple thing – a case for the Apple bluetooth keyboard that you can slot an iPad into when it’s open. I took a chance yesterday on it working with an iPad Mini as well as the full-sized versions and have been very pleased with the results – I’m typing this on my bluetooth keyboard into my portrait oriented mini. It’s sturdy, the iPad isn’t going to fall over, and it even provides a solid base for the keyboard that stops it from rattling against uneven surfaces as you type – it’s currently resting on a slatted wooden patio table which makes mountain ranges look merely slightly bumpy. And, in a world where Apple charge horrendous amounts of money for every accessory they make, it was only £20.

Hardware-wise I think I’m pretty much there now, however I need a bit more work on the software front. As somewhere to dump unstyled text, Evernote works well – the editor is good and it syncs automatically to the internet to save across all of my devices. The Wordpress app works pretty well for my Booze Blog, but this one isn’t quite set up to do so yet (I need to do some serious upgrade work on it other than just hardening it against attack). The Wordpress app has got much better in recent times, but due to certain customisations I’ve got in place over on the Booze Blog I need to do final posting from the website itself. It’s not much of an issue, as the Wordpress dashboard works fine with mobile Safari, but it’s still another step in the process. The final piece is image editing. While Snapseed is really impressive, getting pictures on to Flickr is slightly annoying still thanks to their upload app being iPhone only. I also need to find a good app to resize images, as posting full res piccies on my Flickr account is a habit I got out of many years ago.

However, all in all I think I’m pretty much set. I suspect I’ll be taking notes on paper during the European Beer Bloggers Conference, as such is my wont, but I’ll be tapping away sans-laptop on the train there and back.

Update: No Live Blogging as such at The European Beer Bloggers Conference, but a bunch of posts were written up on my iPad over the last few weeks. The setup is working well enough that my keyboard goes with me to work everyday for any meeting away from my desk. Shiny.