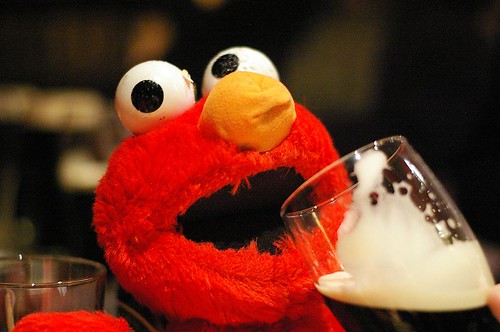 Our team mascot, the mighty One-Legged Elmo, as patched up by Esther.

Last night me and some intrepid flickr'rers took on The Southwark Tavern's weekly quiz - enough of us to make 2 teams of 8 with a side wager on top of the normal £2 a head entry fee: Jim Davidson's Barking Sphincter (them) vs. Bernard Manning's F(o)etid Bowel Tract (us). A bitterly fought contest, with illegal use of a 9th team member who came to "introduce" themselves to us, and our answers, on their side, and someone with very good eyesight, especially at the distance away that the nearest team to us were, on our side led to a close showdown. Unfortunately it was between the Davidson's and someone else, rather than us.

Final result:
Bernie's Bowel - 4th
Jimmy's Sphincter - 2nd, by a mere half point (I hope that this was due to a half point removed for claiming that a recently photographed mid-20s blonde girl was Goldie Hawn. We were wrong with Siena Miller and I'd say we were much closer if I could remember the name of the random of who the picture actually was).

However, the Bowel Tract won a bottle of industrial strength, red, Argentinian, grape based engine degreaser for being the best team name, despite the quiz girl seemingly having trouble pronouncing it without an air of exaggerated disgust. I ran off sober, having stuck to the coke all night for no good reason, on discoveing that the pub now shuts its bar at midnight removing the handy ringing bell that would alert me to the iminent departure of the last train. 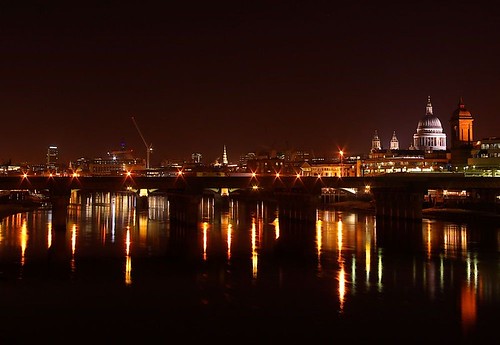 There's always time for a picture off of London Bridge
Collapse