I've had my DS since shortly after it came out in the US - a totally serendipitous business trip put me on the ground near a Wal*mart at just the right time, how convenient. Since getting it have bemoaned, as is the duty of all fans, Nintendo Europe's failure to release anything good. The accusation isn't entirely true, but in true fashion all the good Nintendo games maintain their value when they go secondhand, foiling a cheapskate bastard such as myself. The delights of Pac-Pix (Pac-Man where you draw your player, as well as other sigils, to play the game) have as yet been denied to me due to my refusal to pay £25 for a 2nd hand game. However, I've somehow managed to acquire 6 games now, including Super Mario, Wario Ware, Yoshi Touch and Go and Advance War. But now the Good Thing has happened and Nintendo have released their first WiFi enabled games - Tony Hawk American Sk8land and Mario Kart DS.

Tony Hawk and I have a long relationship, starting back in 2000 when I suddenly realised that I did still like computer games. The game that forced this realisation - Tony Hawk's Pro Skater 2. I ran out shortly after, grabbed myself a Dreamcast and the rest is now, as they say, history. As such as soon as I realised that American Sk8land was coming it was ordered. Unfortunately, as has been the case with the recent Tony Hawk games, I ripped through 99% of the game pretty easily, leaving the boring 1% remaining. "But the onlineness should save it!" said I, Master of Naivete that I am. The wireless wouldn't work with my router. I cried.

Last Friday I finally gave in, only a week after release, and bought Mario Kart DS. One of my favourite games of all time is Mario Kart on the SNES - fought over repeatedly by me and my little bro, the SNES is now lost somewhere...one day I will find it and add it to the console stack in my lounge. The original game is fantastic and this new one just improves on it. The karts have weight, the slipstreaming and wiggly boosts that have been brought in from the later games in the series all work and it ignores the touch screen - no random adding of pointless functionality here. I then tried the wireless again so that I could find some small children to play against - the only time that I can win a computer game. The wireless still wouldn't work with my router. I cried.

So, I moved on from the perils of my home router and decided to see if I could find an open router near my house, so that I could at least connect and see if it worked. The fact that the artic had come to visit Ealing and a cruel wind was blowing up the road did not deter me. Mainly because I was walking home and so didn't have a choice but walk down the road, but also there was an previously unknow drive and dedication to the cause of wireless gaming burning through my veins. And the pub's on the side of the street I was on. So, I wandered down the road tapping the Search button every time it stopped searching - I found 10-15 servers in the 5 minute walk down the road...the DS is the mighty "War-Walking" handheld. SSIDs and a little lock icon letting me know if the network was open or not. Unfortunately the only open networks I found where in my house, which isn't good.

Next plan was to find one of Nintendo's fabled hotspots - free places to logon and beat sleepy americans at Tony Hawk (not to be confused with Tony Hawks, who quite happily admits that he can't skate). So I went to NintendoWiFi.co.uk again, and after telling it yet again that I was based in the UK (which is why I went to the .co.uk site...) it told me that everything was up and running. Yay! I went to the hotspot page and typed in my work postcode - London, near the Bank of England. I was presented with the following map: 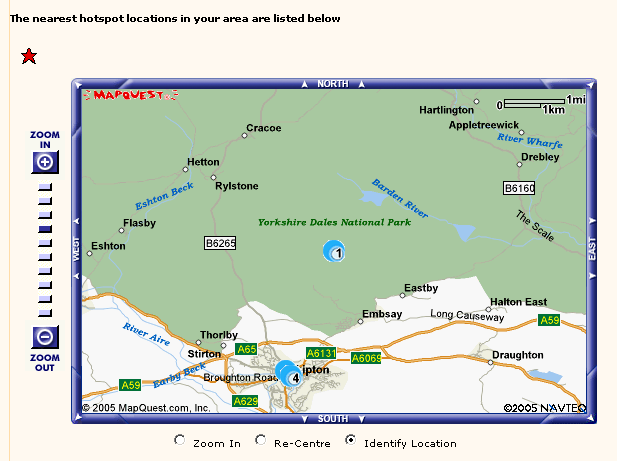 I was quite surprised to find that the nearest hotspot to pretty much the geographical centre of London was in the middle of a forest in the Yorkshire dales. You never know when the urge will hit and the urge to get your game on will become irresistable, so it's nice that Nintendo have though of the more extreme outdoor gamer - Extreme Ironing, your days are numbered.

After so more manipulation of the form I got a more sensible map, although as it lists the locations by the owner company's name most of the places are entirely useless by description - my nearest hotspot is run by Alan Davis (almost the same name as my boss) and is at 30 Threadneedle Street, a place that I'm fairly certain is all offices. However I recognise at least one coffee republic so at least my mission is possible. The only problem is that after all this effort I can't be bothered - there're donuts in the conference room and as today is one guy's last day before he goes off travelling for 6 months we have John Lewis branded Scalextrix minis to play with - it's like the last day of school.

At least I've got a reason to go and walk in The Dales now.

Edit:
30 Threadneedle Street is the Merchant Taylor's Hall. They don't have an open connection for DSs. This is surprising as I thought that such a bustling hive of high technology as an ancient livery company would be welcoming small children from miles around to stand in their lofty rooms and play Mario Kart.
Collapse