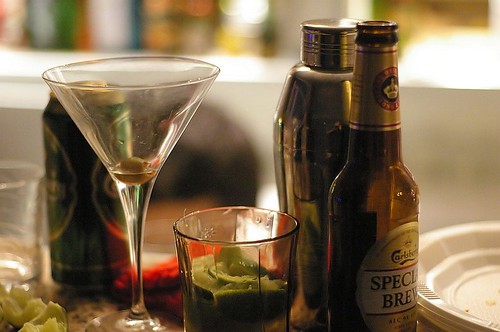 There are certain things in life that shouldn't exist. The bottle at the end of this link is but one. Annoyingly I was trumped at Kosh's housewarming party last night as my gifts of 2 bottles (much more classy than cans) of Special Brew and a bottle of the aforelinked Lambrini Diet (only £1.89 from a nasty shop near you now!) by Adam (not that Adam)'s bag containing 2 half drunk bottles of wine, half a bottle of gin, something czech and almost empty, a can of coke and a can of 7up. Many kudos to Kosh's mum for a fantastic pile of biryani and curry.

The London Perl Workshop was good, even if I did only stay half the day owing to a prior engagement eating Thanksgiving dinner at

bethlet and James' house. I still have not braved pumpkin pie, but did not this time recoil in fear. Gareth's pecan pie experiment was suitably sweet, causing one eater to end up lying on the floor in an attempt to ride the sugar rush; the use of board games to torture him was a stroke of genius. Less genius was my accidental thieveing of a bunch of the "Go Mental!" cards, which I had put in my pocket for safekeeping. Conveniently they were the cards marked "Steal", which in a way makes it all alright.
Collapse