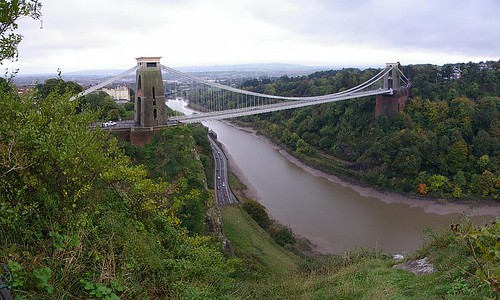 Clifton Suspension Bridge, the main reason I went to Bristol. Which I keep calling Southampton. Which is wrong

I may not be accustomed to long distance travel, but over the last few years I've become quite adept at travelling down to the west country by train. So after popping down to Bristol on Wednesday (good careers fair, unfortunately not a lot of computing students swung by. Lots of engineers and scientists who wanted to depart from their chosen "calling" and defect to the evil but lucrative world of finance. We had the best recruiting toys although the colour changing rubber ducks came in as a close second, and then only because they were entirely unbranded and therefore I can't remember which company gave them out) I departed on what for me is a mighty piece of travelling - two stops in places not in London. First was off to Worcester to pop by and see

g1ng who I hadn't seen for a year or so.

Getting to Worcester was a fun journey. Firstly me and my cow-orkers stopped off for a swift half and some food before going to the station, only to discover (moments after I had receieved my pint) that the barman reckoned that the rush hour traffic meant that the station would be a 30 minute journey and that I should leave at that moment to have a chance of getting a cab to the station on time. I necked my pint, ran round the corner, got a cab and arrived at the station in a little under 10 minutes. This did not fill me with joy. A swift half later I was waiting on the platform for my train to arrive when with a wheezing clunk something that resembled a bus more than a train pulled up, obscuring my view of the rather plush looking Virgin train to Newcastle opposite. Two doors, one at each end of its single carriage, opened up and the aisle of standing people rolled out onto the platform. "You're not going to get on" mumbled one wild eyed commuter as he ran for relative safety of Bristol town centre, and sure enough two people in front of me in the queue the conductor apologised and closed the doors. As the Worcester service runs only every two hours this left me slightly peeved, so I phoned british rail enquiries and after 5 minutes on hold gave up and phoned 118 118, who I accidentally discovered did train times while phoning up for the rail enquiries number the day before. "Well, the next train is actually at leaving in two minutes and ends in Newcastle. Could you get to that one in time?" said the lovely lady at the end of the phone as I leapt down the stairs towards the opposite platform where the teasingly nice Newcastle train had been staring at me for the last 20 minutes. I jumped into the last carriage in a rather unconvincing "Indiana Jones and the very slowly closing train door of doom" adventure kind of way. I then phoned up 118 118 again to find out where I had to go after this train. "Well, you catch the Great Malvern service from Cheltenham Spa to Worcester". Great Malvern service rang a bell - it was the bus-like train that I had been turned away from 5 minutes earlier. So I was catching a train leaving 20 minutes after the train I was meant to and I would be beating it to another station where I would have to wait for it. So eventually we turned up in Cheltenham (rather a blasted heath kind of station, although there was a Spar over the road) to discover that the Great Malvern Bus was even further delayed and I would have to wait 30 minutes for it to arrive - the board occasionally flashed up a warning of "reported full and standing" just to reassure me. Eventually it arrived, 40 minutes late, and it cleared out almost entirely, leaving me with a couple of seats to myself - bus-like it may have been, but it was a rather comfortable bus. It was then that the lights went out. After a few stuttering engine revs sound very much like the the driver turning the key in the ignition and playing with the choke the engine turned over and the lights came on again, only for the conductor to walk down the middle of the car asking us all to leave as the train's safety mechanisms had failed and therefore it had to go back home to get fixed. So off we rolled back onto the platform to wait for the next train, 30 minutes away. Eventually it turned up, changed its mind about its final destination and then set off for the wrong Worcester station. I gave

g1ng a ring and he complained that he'd been forced to drink several beers on his own, and that he would see me at my station rather than the station that was conveniently next door to the pub he was in. Eventually I was decanted in Worcester, only 55 minutes late overall (just enough to be annoying, but no enough to get a refund) and went to wander the streets.

Uncle Billy's recommendation for Worcester pubs is The Cardinal's Hat, the oldest pub in Worcester which is now run by some Austrians and has a fantastic Ingolstadt sourced weizenbier. I had heard tales of their dunkelbier, but they were unfortunately out of it until the next day's delivery, so I was forced to drink a half litre (no pint glasses here) of the wheat beer. There were litre stein's sitting on the side, but we avoided these due to the selection of beverages we had already found. 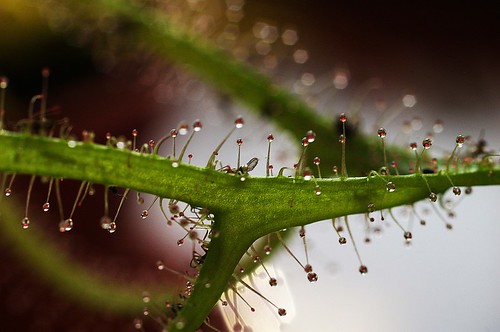 A sundew, one of

Next day I was up bright and early to laugh at

g1ng as he went to work and then to get a 10.30 train back to Bristol to have a wander round there. The 10.30 train turned out to be the Great Malvern service again, so I worriedly waited only to discover that it was a rather nice more modern train which was undelayed, arrived early, left on time and got me into Bristol only 10 minutes late (although I would blame this on some other deliquent train, as mine was so nice, friendly and obviously infected with a good work ethic).

Bristol is quite nice but the only thing of any note was my dedication to London-Bristol diplomatic relations by stopping in at the M&M kebab house for my lunch. Review over here.

A quick walk back to the station (my ten minute cab ride the previous day was a 15 minute walk rather than the 35 I predicted before looking for a cab) and I zipped off to Taunton to visit my parents. Currently they're having their house replastered (due to it being very old and rather on the damp side) and a new kitchen installed, so we were all rather squashed into two rooms down one end of the house. However, my mum now has the Aga that she has lusted after for so many years, and I was introduced to her (Alice the Aga that is, I've met my mum before in the past) several times during the weekend - she is currently the only fitting in a very bare looking room that needs more plastering, more painting and also the rest of a kitchen to be installed. 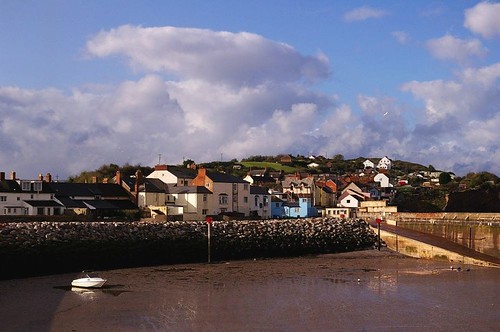 Watchet, where my mum's shop is. There is sometimes sea as well, but not when I took this

Anyway, two days later I'm now on a train coming back up to t'town after playing by the sea, meeting dogs and babies, doing impromptu reviews of the local pub's new gastro-pub style menu and fittings (red mullet fillets with mussel, shrimp and squid boullaibaise - excellent but portion size about 1/2 of what I would have considered to be appropriate, followed by sticky toffee pudding with butterscotch sauce and caramelised banana - banana more "peeled and al dente" than caramelised, sauce wonderfully sweet and the pudding about double the size that I would consider appropriate. Side dishes of carrots and red cabbage were excellent, the beetroot and "minted pea puree" were tasteless and hard, and flavourless and nasty (and most definately not as good as non-posh mushy peas) respectively. Overall a mixed meal which will hopefully become more consistent as the kitchen and new dining room settle, but maybe not sustainable in a pub in a small village 20 minutes drive from Taunton), helping in the "local artists and craftspersons collective"'s shop and photographing the sea. Piccies can be found here

Off to see Mirrormask tomorrow with

jhaelan, my second and final fillum of the London Film Festival after last Tuesday's visit to see Takeshis' with

jhaelan - A weird film which I'm fairly but not entirely sure that I enjoyed, and which I feel can be best summed up by the response by one of the guys who left just behind us: "I think I need to go and sit somewhere normal for a while".
Collapse