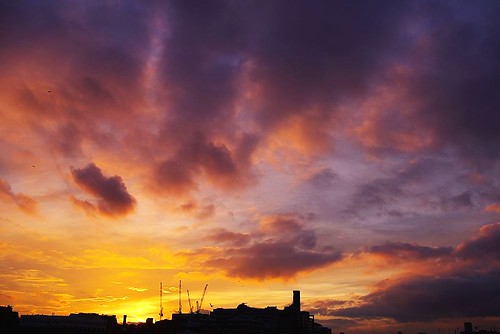 As normal the sun set this evening. However this time I was on London Bridge, had my camera and it looked pretty. I like pretty sunsets, they're pretty. 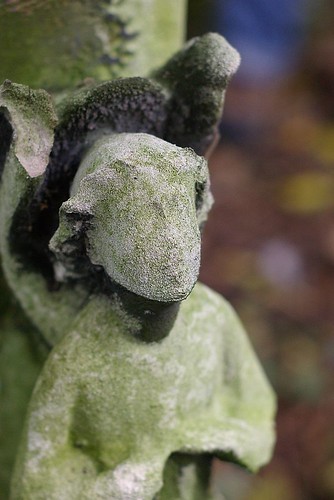 Another flickr meetup this weekend - this time in Highgate Cemetary. We found out when we got there that we were allowed around the west cemetary, having resigned ourselves to the more manicured east half, and saw many rather fantastic sights, including a circular set of vaults and the well manicured, and allegedly looked after by her dutiful son, grave of George Michael's mum. I especially liked this angel, as even though it's face has pretty much worn down you can still make it out in the discolouration of the limestone. More piccies over here

In other news I am currently partly deaf. After getting out of the bath the other day I noticed that I had some water trapped in one ear and now several days later it has got no better, leading to random poppings in my ear and an almost constant "sound of the ocean". Now, I like the sea as much as or more than the average boy but the constant sound is not really what I'm signed up for. I live a good way from the sea, but close enough to visit and this is a situation I am happy with at the moment. So, tomorrow will be a fun mission to discover mystical and magical medicines to fix this mysterious blockage. As it is I'm currently listening to Deep Purple through headphones with a rather serious turn to the balance knob, having just attempted to watch a movie (The Others. I knew the ending when I started so I have no idea if it's any good) and eventually resorted to subtitles in an effort to try and pick up Nicole Kidman's lovely but breathy english accent. I have learnt a little bit of how much I actually depend on my hearing and it's quite scary - even speaking to people with one very dull ear is difficult and I keep getting confused when crossing the road. Well, a little bit more than normal. No more sticking things in my ears from now on. Not even if the voices tell me to...

Uncle Billy's photo of the day:
http://www.flickr.com/photos/graeme_smith/54850716/
Found while trawling flickr. I may have to have another go myself sometime.
Collapse