So. I've been having troubles with my Oyster Card.

About 6 months ago my magnetic personality killed yet another Oyster and the nice man in Northfields station replaced it for me (even if he did forget to transfer my 8quid of prepay. But I forgave him). So this month my yearly trial of renewing my travelcard came around and through the magic of Oyster I received an email and with minimal website wrestling I bought myself another yearly ticket.

So there I was the other day, happily travelling on what I thought was the second day of my new ticket working, when all of a sudden the barriers stopped me getting in or out of the station. The nice man at Northfields (they are all extensions of the same nice man. Maybe they are a colony of alien clones) let me through, but the evil queen of the Bank made me go to the ticket window to speak to the Teutonic keeper of the ticketing powers (aka the german guy behind the counter). He informed me that I didn't have a ticket and let me out after a small show of righteous indignation over the fact that I may not have a ticket, but I did have a credit card bill telling me that I owed the bank the money for one.

I phoned up the Oyster helldesk and a nice man there refunded me my previous days travel (silently taken from my prepay, as it is meant to be if I didn't have a ticket...which I didn't) and assured me that the money would be refunded on Friday (today) at which point I could get a new ticket.

I received my refund voucher today, signed by the man himself...

Mr Kiss, if you ever read this I compliment you on having potentially the best name ever. You, sir, rock.

And to quote the marvel that is "Dude, Where's my Car?" 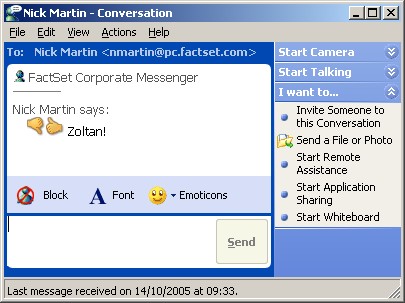 The problem was that they hadn't added my new card to my account so my new ticket was ready to be picked up by my old, broken and now probably destroyed card. Useful. After a call just now it now seems that the refund process starts today, will be done by next Friday, and they can't let me change the card on my account to be my new one (so that I can buy a new ticket on it) as the ticket waiting for me at Northfields is blocking any further transactions and if they override the block then my refund will be eaten by the computer. Also Useful.

The fact that all my Oyster reminders come from "donotreply@keithprowse.com" didn't fill me with any great hopes for the goodness of the rest of their system, and my interaction with it now justifies some of those  fears.

Time to create a new online account with my "new" card now. I feel slightly better as yet another small show of righteous indignation means that I should now have a voucher for my last two days of travel winging it's way to me. I can only hope that the guy on the phone this time has such a good name. I have been impressed though by how happy they were to fix the mistake, the backend may be slightly shonky, but the guys on the firing line seem to have clue.