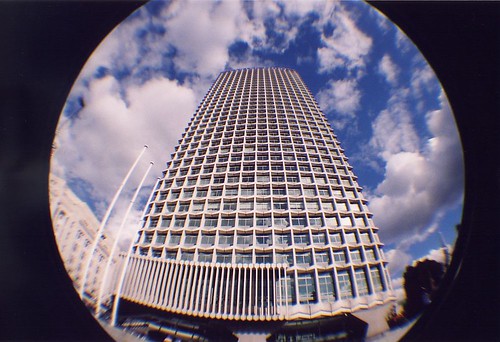 From the nice people at the meetup this weekend I got a Lomographic Society Fisheye camera and as I'm the most impatient person in the world, I shot a roll over the last couple of days and got it developed. It worked quite nicely and there were a good few pics from the set that I liked, although it has shown me how awful my scanner is.

In other news I discovered a bar I didn't know about - The Cove, Covent Garden. I normally avoid all the pubs in the Covent Garden area (apart from The Porterhouse [who weren't serving food this evening], The Maple Leaf [as the birthday boy who we were out celebrating with wasn't too keen] and the Walkabout [as I wasn't on a mission to drink until death]) and never try and get a nice of Real Beer, but I was pleasantly surprised - 4 ales on: St Austell Tribute and HSD, and Skinner's Betty Stogs and Cornish Knockers, all kept well and very tasty (especially the Betty Scogs which I now wish I'd stayed and drunk all night). It's got a balcony overlooking the west end of the market, from which we swore at the busker below who murdered his way through some depressing covers. It was debated whether we could take him out by flinging the ashtray that was sitting on the ledge, but this course of action was vetoed based on the wind conditions, and the lack of a second ashtray for a followup throw once the conditions had been established. They also have a branch of the West Cornwall Pasty Company downstairs, although you have to leave the pub and wander around to their ordering window to get served. Pasties with pirates on get my vote, especially when you can eat them with a pint.

flick, but here again for my own personal aggrandisement (and courtesy of Linkmaster Dave [well today at least, normally he sends me crap]):

He-Man does 4 Non-Blondes
and Adam's Journal

and much better than anything involving Harry Potter

Further linkage from Linkmaster D:
* LINKIN PARK CAME 2 MY HOUSE (I reckon it's the Salad Fingers guy. I like spoons)
* POPStation2

Oh my god no. The DaVinci Code. Now In Technicolour. Coming to a Cinema Near You Soon.

Although, even though it is helmed by Tom Hanks with Ron Howard directing, it does have Sir Ian of McKellen, Audrey Tautou and Paul Bettany in. Oh yeah, and Jean Reno. Jean Reno makes all films good. Even Godzilla. Well. Almost good then.

(My distaste at the DaVinci Code is mainly affected, as I found the book to be fairly inoffensive and only had problems with the stupid occasions on which Dan Brown starting claiming the truth of his book [rather then the rather more sensible and most probably expensively legally advised "All descriptions of artworks, architecture and secret societies are true" (or something close) written at the end of the preamble in the book]. That said, his repeated ending of chapters with "...but that [deep dark secret which is a "massive" twist in the plot] was too painful for him/her to mention yet...it would have to wait." meant that every time another big revelation was dropped into the text in unsubtle fashion I wanted to drown him in the holy blood. Next time I want a happyfunexciting adventure story to read while relaxing drunkenly on holiday I will borrow one of his other books from someone. Paying money for one still makes me feel pretentiously dirty)

Superman also seems to be getting expensive, although the new Harry Potter fillum could take the title of "Most Expensive Film Evah" for a little bit. I wonder how many times they could have made Jesus Christ Vampire Hunter for that much...

This is how to open a stunt man awards ceremony. Rock! Almost literally, although his real name is Dwayne

Thankyou for sharing the power of your car stereo with me at this time, just as I am going to bed. In doing this you have demonstrated that you have at least three things that I don't:
1. A Nice Car
2. A very loud and expensive stereo
3. No taste in music

I, however, have three things right here that you may not have in your car:
1. A bottle of cheap vodka
2. A rag
3. A lighter

Now please turn off your stereo, you have been parked for 5 minutes, stop beeping your horn every now and again (not even in time with the music. I might also have more "rhythm" than you it seems) and go away. If you do not do this soon then I will make you a gift of my three things, and will even craft them into an attractive looking night-light for you, as originally designed by some finnish friends of Vyacheslav Mikhailovich Molotov (Thankyou Wikipedia).