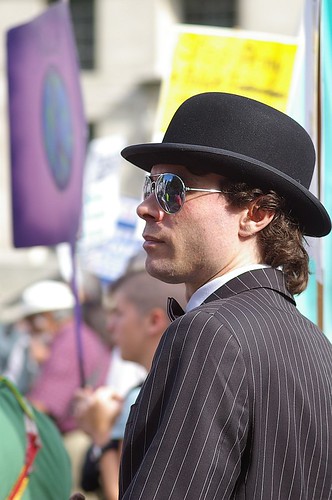 Having met up with the european photobloggers on Saturday morning, my walking group and I (thanks to Emma and Eos Chaos (thankyou for pitying me enough to come on my walk) wandered around as far as Whitehall, where the March for Peace and Liberty was going on its first leg.

non_trivial - I have more helicopter pics that I can sell you through my specialist website. Discretion guaranteed) but they were all rather friendly even when strapping on their batons. We got there early and were on the Downing Street side of the road, whereas the walkers were herded onto the other side as they left parliament square.

The march started somewhere between an hour and 15 minutes late depending on whose timings you listened to (the third member of my walking party who disappeared before we started [1 hour] or the policeman I had a chat with next to the "Women of World War 2" memorial [15 minutes]) and kept coming past for rather a while. Good turnout kiddies.

The guy in the piccy to the right is (I think) a member of Billionaires for Bush, who are a rather rocking piss-taking protest group who people often don't realise are kidding. The guy didn't seem to be flashing his "Give War a Chance" banner (carefully concealed inside his jacket) as much as the guys I saw in New York flashed their "Thankyou for paying our taxes" and "End Poverty: Hire a Child" signs while chanting "Four More Wars".

In the evening there was more drinking at the Troubadour, but due to the day of walking (the largest group (of the 3) was 21 people who were led by Eric around Brick Lane and Hoxton for about 5 hours or so...) it was a slightly muted affair, but with a prize raffle drawn for prizes donated by lovely sponsory people - there were enough people there that pretty much everyone got a prize. I ended up with a Lomography Fisheye which is a shiny toy.

Anyway, PhotoBlog pimping time:
* http://london.photobloggers.org/ - hub for London PhotoBloggers
* Apparently Nothing - Lorissa's blog, she did a load of the organising
* Dick's Daily - Not porn. The site of Richard (Dick), the third of us  tour leaders (he got 7 people who he took on a walk along the north bank of the Thames from Trafalgar Square to Monument, stopping off at the water fountains on the way...)
* Imagology - Stuart who did an impromptu modelling shoot with a Charlie Chaplin impressionist in Covent Garden
* Pic-a-Day.co.uk - Neil, one of the lensbaby winners on Saturday night who let me have a go. Now I'm going to have to buy one.
* Lynn and Rachel who came over from Holland for the weekend. Rachel had a shiny SX70 that means I will be scouring ebay again soon...

I can't remember anyone else's names, let alone their websites.

A quick link for people who liked Captain Jack from Dr Who:
http://www.trh.co.uk/showing/
Collapse